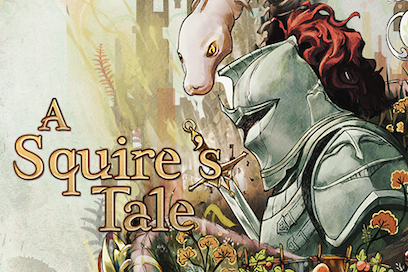 Seize victory for your Lady in medieval England! The crown prince has gone missing, and only you can rescue him. But can you resist the call of faerie long enough to complete your quest? A Squire’s Tale is a 152,000-word interactive medieval fantasy novel by Benjamin Appleby-Dean. I sat down with Ben to talk about medieval fantasy and the inspirations for his game. A Squire’s Tale releases this Thursday, May 14th.

I love the medieval fantasy setting of this game. Tell me a little about the world of A Squire’s Tale.

​A Squire’s Tale is set in a hopefully-accurate version of 14th-century England. The country was in a constant state of unrest and rebellion due to the unpopular reign of Richard the Second—the Black Death and the Peasant’s Revolt had been followed by expensive and unsuccessful wars abroad, and he was barely clinging to his throne at the time of the story. The collective upheavals of the time also led to more equality among men and women due to the labour shortages, and many other medieval norms were frequently broken—priests openly took mistresses or common-law wives, and same-sex couples faced less persecution than they later did under the Tudors.

It’s also a time when the very idea of knighthood was being reinvented—many of the older chivalric ideas were seen as having died with Edward of Woodstock (the famous Black Prince), and knights and jousting were on the cusp of becoming a kind of formalized play-acting.

Most of the characters I’ve written about here were real historical figures—although I had to invent Lady Catherine D’Arundel and Prince Bertram for the sake of the plot!

I tried to write the fantastic elements of this story based on how people of the time would have perceived them, rather than more modern ideas of Faerie—most medieval tales of otherworlds are anarchic and socially disruptive, or downright surreal. Alchemy was widely accepted and even practiced by the Church, and what we think of as the supernatural was seen in a much more everyday, matter-of-fact light.

This is your first piece of interactive fiction, but certainly not your first publication. Tell our readers a bit about your background as a writer.

​I’ve been writing for about ten years now, and have had two novels published through Wild Wolf—a contemporary horror story (Lamplight) and a coming-of-age fantasy novel (The Stickman’s Legacy). All of my work is set in the same fictional world—sharp-eyed readers might notice a few places and background characters shared between my novels and A Squire’s Tale, despite the difference in time periods!

I have a particular interest in LGBTQIA+ fiction, especially where the identity of the characters isn’t a major focus of the plot—I’m a firm believer in incidental representation, and it’s one of the things that first drew me to COG. I’ve dabbled with game development on a number of occasions as a hobby, but this is my first time releasing anything interactive to the public—I’m very excited (and a little nervous) to see how it goes!

What did you find most surprising about the process of writing a branching narrative game?

​​​​I found coming up with balanced, compelling choices at every stage of the game to be surprisingly challenging—especially when it came to avoiding dead ends and “wrong” choices. I was also pleasantly surprised by how easy it is to hide things in the narrative—most of the choices and consequences in A Squire’s Tale should be fairly obvious, but I’ve added a couple of well-hidden secrets for anyone who cares to go looking…

What’s your experience and background in playing games? Do you have any favorites in the COG canon of games?

​I’ve probably spent rather too much of my life playing games—from the Fighting Fantasy and Lone Wolf gamebooks of the 1980s to the more modern digital worlds of Silent Hill, Baldur’s Gate, Portal, Life is Strange, and so on. I’m fascinated by the possibilities of storytelling in a more interactive medium—the way you can use player awareness of their own role within the story, for instance, or using environmental details to tell a story rather than explicit narrative. Nowadays I tend to play a lot more independent or low-budget titles rather than big releases as I think a lot of the more interesting games writing is coming from smaller developers—Night in the Woods and Heaven Will Be Mine are among my recent favorites.

​My favorite COG title is Heart of the House​—I’m a huge fan of traditional ghost stories, and I love the decaying, Shirley-Jackson-esque atmosphere and the slow descent into surrealism as the player becomes lost in the architecture.

Where did the idea for A Squire’s Tale come from?

The main inspiration was one of my favorite poems—Christina Rossetti’s “Goblin Market,” with its lyrical, decadent merchants and their wares. The same kind of Faerie Market occurs in passing in a lot of fantasy literature, but I wanted to write something where it was more central to the story—asking what kind of people come to sell at the Market? What brings them there, and what are their own stories and backgrounds?

I also read a number of Victorian medieval romances when I was younger—The White Company, Sir Nigel, Ivanhoe and so on; and although they’re badly dated as novels, I liked the idea of doing something set in the same period. The 14th century was a time of enormous historical change—the oncoming transformation of chivalry, the social upheavals that followed in the wake of the Plague, the subsequent Peasants’ revolt, and the multiple attempts to unseat Richard II. What better time for a mysterious group of travelers to show up, offering to sell people all the answers they’re missing?

I actually have several projects going on at present—I’m working on a children’s book set in the same fantasy realm as A Squire’s Tale, as well as my own traditional ghost story for a more adult audience. I also have a couple more ideas for interactive fiction if A Squire’s Tale does well enough!