180 Files: The Aegis Project–Uncover a web of evil as an elite superspy! 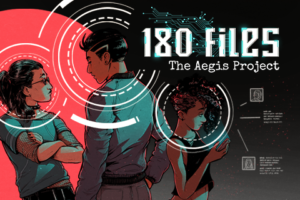 We’re proud to announce that 180 Files: The Aegis Project, the latest in our popular “Choice of Games” line of multiple-choice interactive-fiction games, is now available for Steam, Android, and on iOS in the “Choice of Games” app.

Uncover a web of evil as an elite superspy! You might break a few rules—or a few hearts—but you won’t break cover. As Agent 180, a star secret agent, you’ve never found a problem you couldn’t solve with guns, gadgets, or a devastating quip. But after a personal tragedy sends your life off course, your next mission will test you to your very limits.

180 Files: The Aegis Project is a 184,000 word interactive spy thriller by Karelia Hall, where your choices control the story. It’s entirely text-based—without graphics or sound effects—and fueled by the vast, unstoppable power of your imagination.

An ex-informant is dead—and you’re sent to find out why. As you go undercover at the sinister company he worked for, dangerous secrets begin to emerge, along with shadows from your own past. Can you infiltrate the company in time to stop a deadly plot? And with your career in the balance, will you follow orders to the bitter end—or be tempted into a deal with the devil?

• First place winner of the Choice of Games Contest for Interactive Novels
• Play as male, female, or nonbinary; as gay, straight, bisexual, demisexual or asexual.
• What lurks in Agent 180’s past? Choose the background that led you here.
• Use tech knowledge, charm, strategy, brute force, or sheer nerve to achieve your goals.
• Choose from an assortment of gadgets to help you.
• Decide what’s more important to you – the mission, or yourself.
• Participate in a cover-up to please your employers, or expose the truth to get justice.
• Try to build genuine relationships – or manipulate people for your own ends.
• Romance an intrepid reporter, a charming executive, or a brilliant scientist – or pique the interest of a dangerous enemy agent.

We hope you enjoy playing 180 Files: The Aegis Project. We encourage you to tell your friends about it, and recommend the game on Facebook, Twitter, Tumblr, and other sites. Don’t forget: our initial download rate determines our ranking on the App Store. The more times you download in the first week, the better our games will rank.