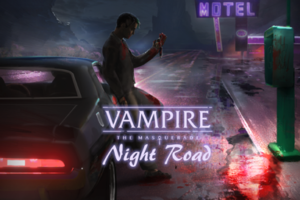 In partnership with World of Darkness and Paradox Interactive, Choice of Games is proud to announce the release of Vampire: The Masquerade — Night Road now available on Steam, iOS, and Android.

It’s 20% off until October 1st! Furthermore, as a special offer, if you purchase Vampire: The Masquerade — Night Road by 11:59pm PDT on September 25th, we’ll unlock the options to play as Clan Tremere or Caitiff, “Usurpers and Outcasts,” for free. (Note: Steam purchasers who purchase during the release day period automatically have the DLC, no need to send us a receipt!)

The elders have entrusted you, an elite vampire courier, to deliver their secrets. Can you outrun the hunters, the other drivers, and the rising sun?

Vampire: The Masquerade — Night Road is a 650,000-word interactive horror novel by Kyle Marquis, based on Vampire: The Masquerade and set in the World of Darkness shared story universe. Your choices control the story. It’s entirely text-based—without graphics or sound effects—and fueled by the vast, unstoppable power of your imagination.

It’s a new Dark Age for the dead. When the Second Inquisition’s vampire hunters hacked phone lines and computer networks to expose and destroy vampires all over the world, the elders turned to undead couriers like you. For ten years, you’ve raced across the desert between cities, delivering vital information and supplies. But when an old friend reappears with a plan to disrupt the blood trade across the American Southwest, everything you’ve built starts crashing down.

Outrun the Competition. Drive, hide, or fight back! Unleash the powers of your blood in ancient Disciplines to change form, vanish from sight, or dominate the minds of your enemies. Employ blood magic, inhuman strength, and the creatures of the night to escape destruction—or just run your enemies off the road and keep driving.

Deliver or Die. All secrets have an expiration date—and so do you. Race across the desert to deliver secrets, promises, and threats. Do whatever it takes to drop off your parcel. But when the job is done, will you stick around to exploit the situation?

Run Down Your Prey. Only blood can sate the Hunger. Charm, seduce, or seize what you need, but don’t let anyone know what you are. If you break the Masquerade, your fellow vampires will destroy you for your indiscretions, assuming the Second Inquisition doesn’t find you first.

Death is a hard road. You drive it every night.

We hope you enjoy playing Vampire: The Masquerade — Night Road. We encourage you to tell your friends about it, and recommend the game on Facebook, Twitter, Tumblr, and other sites. Don’t forget: our initial download rate determines our ranking on the App Store. The more times you download in the first week, the better our games will rank.