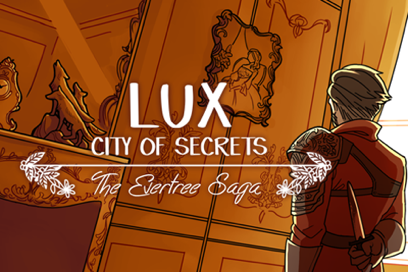 Welcome to ​Lux, City of Secrets,​ the third book in​ The Evertree Saga!​

It’s time to make a name for yourself in the city of Lux. In this first half of a two-part epic, you will discover a vibrant and dynamic metropolis full of mysteries. Meet and mingle with characters old and new, uncover clues and solve cases, wield weapons and magic, and rise to the top before the city drags you under!

Lux, City of Secrets​ is a 438,000 word immersive interactive experience by Thom Baylay. It’s entirely text-based–without graphics or sound effects–and fueled by the vast unstoppable power of your imagination.

The mayor of Lux believes someone is trying to kill him, and he has chosen you to save his life. But protecting the Luxican aristocracy is not your only priority. Will you be able to balance the responsibilities of life in the big city or will you be swallowed up by an unforgiving urban jungle? Will you prioritize your friends, your reputation, your career? In an open world where, more than ever, the choices you ignore matter as much as the ones you explore, you will need to choose carefully if you are to survive.

Reunite with old friends and enemies, continue to build the relationships you started in​ Evertree Inn​ and​ Sordwin​, or abandon it all in pursuit of something new. It’s time to find out if you have what it takes to uncover the mysteries of ​Lux, City of Secrets!​

When everyone has a secret, can you uncover the truth?

Lux, City of Secrets​ is the first half of a two part adventure which will be concluded in ​Lux, City of Lies.​

Thom Baylay developed this game using ChoiceScript, a simple programming language for writing multiple-choice interactive novels like these. Writing games with ChoiceScript is easy and fun, even for authors with no programming experience. Write your own game and Hosted Games will publish it for you, giving you a share of the revenue your game produces.