VERSUS: The Deathscapes—The epic conclusion to the VERSUS trilogy! 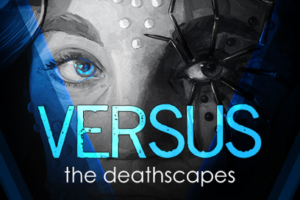 We’re proud to announce that VERSUS: The Deathscapes, the latest in our popular “Choice of Games” line of multiple-choice interactive-fiction games, is now available for Steam, Android, and on iOS in the “Choice of Games” app. It’s 40% off until June 3rd!

You can also pick up VERSUS: The Lost Ones and VERSUS: The Elite Trials for 25% off until June 3rd!

Unlock the secrets of the galaxy in the epic conclusion to the VERSUS Trilogy! Take your place among the gods with the superpowers you’ve stolen from them.

VERSUS: The Deathscapes is a thrilling 200,000-word interactive novel by Zachary Sergi, author of our best-selling “Heroes Rise” series. Your choices control the story. It’s entirely text-based–without graphics or sound effects–and fueled by the vast, unstoppable power of your imagination.

At the start of the VERSUS Trilogy, an unknown power imprisoned you on planet Versus, forcing you and dozens of other prisoners to vote for who will fight in deadly gladiatorial battles. Each prisoner has unique superpowers, but you started with just a single power: the ability to steal powers from others and absorb their memories.

Now, with the powers you’ve stolen, you can rival the gods themselves! You’ve stolen their power to fly, to fire beams of golden energy, and to dominate the minds of others. But you can’t stop there. To find Dhanthik, the hidden savior of your homeworld, you must use your Full Absorb power on nearly every prisoner, unlocking powers and memories beyond your wildest dreams.

At the same time, you’ll play the most dangerous political game of your life, outmaneuvering your longtime foes Empress Vaccus and the Bominate-and maybe even your own friends-to survive the Versus Vote.

Engage in the most intense MemoryTravel yet, voyaging to distant planets and to the deepest hearts of those closest to you, and finally answering the questions that have haunted you: Who is Dhanthik? Who brought you here to Versus, and why? Who are you?

This isn’t just the end of the Trilogy. This is the climax of your story, your triumph, your apotheosis.

• Play as gay, straight, bi, pan, or ace. Dozens of gender identifications.
• Absorb dozens of powers and memories, rivaling the gods themselves
• Every question about the Choice of Games Sergiverse answered
• Fight in the most dangerous gladiatorial matches yet
• Stand alongside old friends—or rivals—like MamaNa, Oli, and OtherBoard
• Discover profound truths through the psychic journey of MemoryTravel

We hope you enjoy playing VERSUS: The Deathscapes. We encourage you to tell your friends about it, and recommend the game on Facebook, Twitter, Tumblr, and other sites. Don’t forget: our initial download rate determines our ranking on the App Store. The more times you download in the first week, the better our games will rank.