Pugmire: Treasure of the Sea Dogs—Will you be a good dog, or a scurvy sea dog? 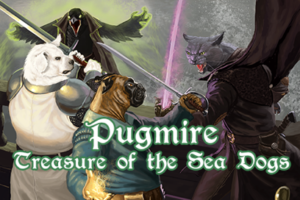 We’re proud to announce that Pugmire: Treasure of the Sea Dogs, the latest in our popular “Choice of Games” line of multiple-choice interactive-fiction games, is now available for Steam, Android, and on iOS in the “Choice of Games” app. It’s 25% off until July 22nd!

Will you be a good dog, or a scurvy sea dog? In this swashbuckling furry adventure, when nefarious pirate cats murder your mentor and steal the famous Corgi pearls, you’ll chase the cats across the seas to fetch and recover the treasure!

Pugmire: Treasure of the Sea Dogs is a 100,000-word interactive nautical tail by Eddy Webb, where your choices control the story. It’s entirely text-based—without graphics or sound effects—and fueled by the vast, unstoppable power of your imagination.

“Be a good dog. Protect your home. Be loyal to those who are true.” — The Code of Man

Dogs, cats, and other uplifted species have inherited the world, untold centuries after the Ages of Man have ended. Now, in the kingdom of Pugmire, you are a recently graduated member of the Royal Pioneers of Pugmire, a group dedicated to traveling the more hazardous parts of the world to protect dogs in need, recovering lost knowledge and artifacts, and hunting down dangerous criminals. But when your trustee and patron Padraig Corgi is murdered by a dark wizard, and his family’s treasured pearls stolen, it’s up to you to recover the pearls and avenge his death!

You’ll travel with fellow pioneer Sonya Pyrenees, a fearless warrior who has turned her back on her family’s heritage in order to fight evil abroad, and Damian Borzoi, a ne’er-do-well ex-lover of Padraig’s who wants revenge while having a good time…ideally with someone else’s money. Together you explore the ruins of Earth with sword or spells in your paw!

As you strike out and make a name for yourself, and for your family, can you navigate the tense post-war politics between your kingdom and the enemy city-states of the cats? Will you embrace or reject the dogs who have cast off the leash of civilization? Are you a good dog, and will others see you as one?

• Play as male, female, or nonbinary; gay, straight, aromantic, or polyamorous.
• Explore a future-fantasy world of uplifted dogs, cats, birds, and others.
• Navigate the politics of both the kingdom of Pugmire and their rivals, the cats of the Monarchies of Mau.
• Choose any breed of dog you like, as well as from one of eight distinct callings.
• Sail on the Acid Sea, keeping your ship afloat while avoiding sea monsters and pirates.
• Fight or outsmart demons, zombies, and the kraken.

We hope you enjoy playing Pugmire: Treasure of the Sea Dogs. We encourage you to tell your friends about it, and recommend the game on Facebook, Twitter, Tumblr, and other sites. Don’t forget: our initial download rate determines our ranking on the App Store. The more times you download in the first week, the better our games will rank.