Wraiths of SENTINEL—Dying made you the perfect spy! 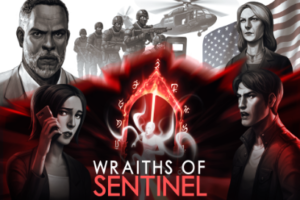 We’re proud to announce that Wraiths of SENTINEL, the latest in our popular “Choice of Games” line of multiple-choice interactive-fiction games, is now available for Steam, Android, and on iOS in the “Choice of Games” app.

Dying made you the perfect spy! Will you use your phantom powers to defend the United States government, or overthrow it?

Wraiths of SENTINEL is a 250,000-word interactive novel by Paul Gresty where your choices control the story. It’s entirely text-based—without graphics or sound effects—and fueled by the vast, unstoppable power of your imagination.

You are a phantom being of supernatural energy, working as a covert intelligence operative for SENTINEL, a secretive government agency. Your unrivaled powers of surveillance can safeguard the freedom of the country; your paranormal wraith abilities will make the difference between being hunter and prey.

SENTINEL has tasked you to investigate the No-State Separatists, a ruthless band of domestic terrorists. Can you uncover a link to the extreme-right True Freedom Party? Your investigation will delve into the realm of political corruption, draw you into the spirit world, and bring you to the nexus of all reality itself.

As you’ll soon discover, the true threat to the nation is far closer than you’d ever imagined.

• Play as male, female, or nonbinary; straight, gay, bi, or beyond notions of mortal sexuality
• Investigate enemies of the state with two other wraiths, Marly and Zhou, as well as a range of field operatives and high-tech equipment
• Pursue romance with a fellow wraith, a sorcerer, or a medium
• Explore the cause of your own mortal death! What role did MetaHuman Inc. play in your demise?
• Go rogue! Escape detection by the best ghost-hunters in the world
• Return to your mortal, human life—or revel in the abilities you possess as a wraith, forever
• Prevent god-like power from falling into the wrong hands—or pursue that power for yourself!

The fate of the world is in your intangible hands!

We hope you enjoy playing Wraiths of SENTINEL. We encourage you to tell your friends about it, and recommend the game on Facebook, Twitter, Tumblr, and other sites. Don’t forget: our initial download rate determines our ranking on the App Store. The more times you download in the first week, the better our games will rank.