Pon Para and the Unconquerable Scorpion—Raise an army to save reality itself! 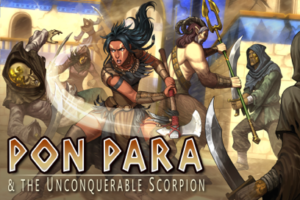 We’re proud to announce that Pon Para and the Unconquerable Scorpion, the latest in our popular “Choice of Games” line of multiple-choice interactive-fiction games, is now available for Steam, Android, and on iOS in the “Choice of Games” app. It’s 40% off until December 23rd!

Chosen by the gods, betrayed by your king, you must stop the Scorpion!

Pon Para and the Unconquerable Scorpion is a 742,000-word interactive fantasy novel by Kyle Marquis, and the sequel to Pon Para and the Great Southern Labyrinth. Your choices control the story. It’s entirely text-based—without graphics or sound effects, and fueled by the vast, unstoppable power of your imagination.

The philosopher witch Teijia has unleashed a new weapon: a scorpion-god whose venom poisons the very foundations of reality! As the edges of the world disintegrate, the nomadic Stormraiders make one final, desperate push to defeat the Three Nations and carve out their own kingdom.

This time you’ll need more than the sign of your god and a few friends: to end the war and save the world from destruction, you’ll need an army! Establish yourself as a warlord, crime boss, or divine leader and cross oceans and deserts to find a weapon that can stop the Unconquerable Scorpion!

Old Friends and Enemies Return. Once again find friendship, enmity, or romance with Melaxu the nymph philosopher and Tamur the Desert Empire spy. But beware: the Stormraiders Galimar and Gisla are back too. And what will your own rulers, King Hyras and the Desert Empress, demand of you this time?

New Heroes, New Threats. Recruit Col the satyr general and his young ward Clannath, a crow-woman cursed by the God of Rage. Claim territory across two nations and scheme to protect your followers. But beware the ambitions of the dark priests…and of the priests of Heaven, who still consider you a heretic and enemy of the gods!

The End of Philosophy? Even as King Hyras and Lord Vankred square off to end the Stormraider War, the witch Teijia unleashes her ultimate weapon: the Emissary Beast Magdala, the Unconquerable Scorpion, whose venom can destroy the engines that maintain the World That Remains. What can stop a creature forged by the gods to be unstoppable?

Return to the World That Remains. Make yourself at home!

• Play as male, female, or nonbinary; gay, straight, bi, or ace
• Defeat enemies with sword and spell, or make allies with diplomacy, deception, and the miracles of your god
• Unleash new companions and train them in alchemy, infiltration, diplomacy, or the arts of war
• Explore ancient cities, savage wastelands, and the glittering, deadly palace of the Desert Empress
• Find friendship, romance, or rivalry with nymphs and satyrs, thieves and monarchs, dark warriors or holy sages
• Bring peace to warring nations—or drive them to destruction for your own ends
• Forge an army strong enough to stop Magdala, the Unconquerable Scorpion

We hope you enjoy playing Pon Para and the Unconquerable Scorpion. We encourage you to tell your friends about it, and recommend the game on Facebook, Twitter, Tumblr, and other sites. Don’t forget: our initial download rate determines our ranking on the App Store. The more times you download in the first week, the better our games will rank.