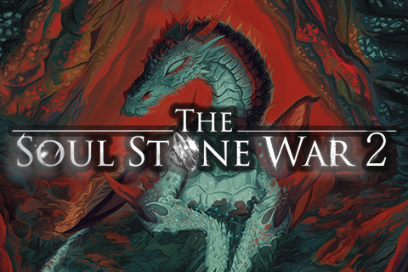 One of your companions is lost to you, and your party has been battered down. Secure in his supremacy, Manerkol holds all the cards.

Yet the power of the Gods now runs through your veins. Find allies to your cause, gather more Soul Stones, grow into your legend, and make choices that will change the shape of your world.

Will you accept the hand fate has dealt you, or will you fight against the presence filling your mind with visions of power and domination?

The Soul Stone War 2 is the thrilling 400,000-word sequel to the interactive fantasy novel The Soul Stone War.  Meet characters old and new, pick up on the friendships and romances you began and grow into the hero that you’re meant to be.

Rise, Soul Stone Wielder. Your fate lies in your hands.

Morgan developed this game using ChoiceScript, a simple programming language for writing multiple-choice interactive novels like these. Writing games with ChoiceScript is easy and fun, even for authors with no programming experience. Write your own game and Hosted Games will publish it for you, giving you a share of the revenue your game produces.