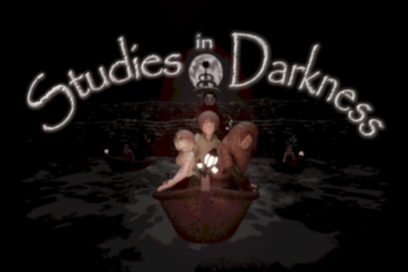 Your submarine is gripped by giant tentacles! You are in a battle of wills with a murdered classmate! You play as every scoundrel in this fantasy heist. Steal a dark power… Escape with your soul!

Studies in Darkness is an adventurous 30,000 word interactive dark fantasy novel by Nathaniel Johnson, where your choices control the story. It’s entirely text-based—without graphics or sound effects—and fueled by the vast, unstoppable power of your imagination.

In the haunted gothic city of Doskvol, you control the last surviving members of a secret society. Restore your infamous reputation by heisting treasure from an abandoned laboratory. Use ectoplasm-powered steampunk technology to dive deep underwater for a unique and precious artifact.

Beware, you are breaking into the Morlan Hall of Unnatural Philosophy. You will face the result of centuries of experiments with the occult and the undead. But you are prepared! Unleash the power of alchemy, electricity, and each scoundrel’s unique supernatural abilities!

The pressure is rising. Your future has been stolen from you. Steal it back!

Nathaniel developed this game using ChoiceScript, a simple programming language for writing multiple-choice interactive novels like these. Writing games with ChoiceScript is easy and fun, even for authors with no programming experience. Write your own game and Hosted Games will publish it for you, giving you a share of the revenue your game produces.