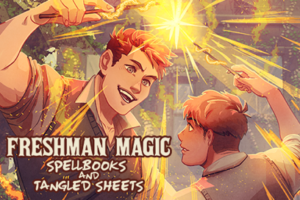 A magical murder mystery brimming with gay sex! At this college, you’ll work up a sweat in dueling club, in the library, in the shower, and in your dorm. Freshman Magic: Spellbooks and Tangled Sheets is a 263,000-word interactive gay romance novel by Raven de Hart. I sat down with him to discuss his work, the novelty of interactive romance, and more. Freshman Magic releases this Thursday, May 26th. You can play the first few chapters for free, here.

You’re an author of M/M romance and erotica, but this is your first foray into interactive fiction, I think? Tell me about yourself and your work.

It’s not quite my first time out, but everything I did in interactive fiction was many years and two houses ago, so I’m basically fresh to the scene. I’ve been writing M/M romance for…a decade this year? I think it’s a decade this year. Longer than that, if you count my teenage fan fiction years, but I don’t have a lick of any of that still around, and no one ever paid me for it, obviously. I’ve lived in Eastern Washington state (Nope, no mountains and trees and rain here. This is a desert.) my whole life. I currently live in a rural manufacturing/agricultural town with my roommate and five Golden Retrievers. They take up…honestly most of my non-writing time. Not one of them is under fifty pounds, and they’re all lap dogs. But when I do manage to extricate myself from the big furry dog pile, I write mostly paranormal and fantasy romance, although with a smattering of contemporary as well. I’ve always loved speculative fiction, so that wends and weaves through all my work. In non-writing, I love classical trombone, and before I turned to writing, I was full-bore on culinary arts as a career path. So I have lots of opinions on food, cooking, etc, and I love to get in the kitchen and get my hands dirty (And then wash them, of course, because I’m not about that salmonella life.). I’ve also got a passing interest in geology and gemology, modern art, political science…I’m interested in a lot of things. Jack of all trades, master of none, better than a master of one, right? But I’m mostly a very boring Snake Person gay who stays at home and sits at his laptop all day.

What did you find most enticing about writing in this new format?

So, I’m not one of those authors who struggles and scrabbles for ideas. I have a ton of ideas. Writing Freshman Magic was a really good opportunity to throw a lot of ideas on the table. I’m used to telling one story from front to back, but with this, I was able to tell many stories in one project. A friends to lovers romance? Yep. A mystery? You betcha. A geek/jock romance? Absolutely. Urban fantasy? Of course! It was, in a lot of ways, the ultimate sand box where I got to play around. Plus, like, who in my generation didn’t at least sort of want to make a game at some point? I know I did. And now I actually made a game. Certainly not alone, but I made one. I got to tell five romance stories with nigh-endless variations available to them. I’m super into the whole idea of it. And then, to top it all off, there are just things that you can’t do in a mainstream, standard novel. There was a lot of room to play, pun intended, with this game.

And what was most challenging for you?

I did not fully expect how much there was to this. I work IT on the side, and I have some level of proficiency in coding. So that was a learning curve, but I wasn’t starting at the bottom of that particular mountain. But the sheer volume of words I had to put on the page was completely unexpected. I’m used to writing, at the most, 90K-100K words on a project, and I think this one ended up right around 260K words, counting all the pieces of code involved. So that took some adjustment. I also never spend this much devoted time to a single project. It took about three times as long as I would with a standard book. It really pushed against my endurance, but in a good way. It’s nice to push yourself. Obviously trying to make sure everything stayed functional and was well-balanced, and that continuity didn’t break, was a different set of challenges, and I had to adjust to them. But the biggest struggle was just the dedicated focus and the simple size of the project that really made me stretch and grow.

What do you hope your novel readers will enjoy about Freshman Magic?

So, romance readers tend to be particularly voracious, myself included. We can chew through books at lightning speed. So I think Freshman Magic is a good chance to provide a lot of stories in one fell swoop. No waiting for a whole series to come out. No trying to decide which book to read. No scouring for the rest of an author’s catalog. You play Freshman Magic and you get all the stories you need, at least for a little while. Plus I really focused heavily on some of my personal favorite tropes. I’ve mentioned geek/jock and friends to lovers, but I also wanted to play around with some bad boy and wealthy hero romance tropes. Plus one thing I’ve always, always done in my books is include a lot that wasn’t directly involved in the romance. Every now and then, I rattle off a straightforward romance book. But for the most part, whether it’s a civil war or a missing persons case or, as here, academic achievements and a mystery storyline, I always have something else going on alongside the romance. In fact, in my most recent book, it was very polarizing. Some people loved how much I focused on food and cooking, and it obviously bored some people to tears. But it’s always been a part of my particular writing style. I don’t just tell love stories. I tell stories about people falling in love while other things are happening. So hopefully, that’ll appeal to people in the game as much as it does in the books.

Is writing in a fantasy/magic world a departure for you?

Far, far from it. I grew up reading fantasy novels, and before I started writing romance at all, I was writing and publishing fantasy. It’s honestly harder for me not to write with some tinge of the unreal to it. My brain just puts the weird and off-kilter and fantastical into everything that I write. If I’m going to escape into a piece of fiction, why not make sure that piece of fiction has dragons and magic? That seems like an obvious next step to me. So no, certainly not a departure for me.

I’ve got a few things in the pipeline at this point. I just had the aforementioned cooking romance, A Teaspoon of Desire, come out about a week ago. I’m partway through drafting a new urban fantasy romance about Norse demigods, plus I’ll be releasing a small shifter romance some time this summer, which I unfortunately can’t talk about too much until more details are made public. But Dachshund shifter – who can say no to that, right? And then, if the planets align properly, I might be able to get out another secret urban fantasy project that’s recently captured my attention, dealing with a magical fish and game department. I could keep going – like I said, I always have so many ideas – but that’s what’s currently most pressingly on the table for me.