Runt of the Litter — Steal and raise a baby war gryphon! 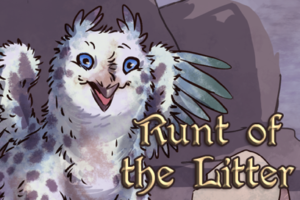 We’re proud to announce that Runt of the Litter, the latest in our popular “Choice of Games” line of multiple-choice interactive-fiction games, is now available for Steam, iOS, and Android. It’s 25% off until Mar 2!

Steal and raise a baby war gryphon! Will you fight dragons together to save the empire, or defy the empire and lead your people to freedom?

Runt of the Litter is a 150,000 word interactive fantasy novel by Kelly Sandoval, where your choices control the story. It’s entirely text-based—without graphics or sound effects—and fueled by the vast, unstoppable power of your imagination.

The gryphon keepers hold all the power in the Empire of Vaengrea. They make the laws, patrol the borders, and only give gryphon eggs to their chosen heirs. As a poor stable hand, a “thrall,” you know you’ll never have a chance to prove yourself.

But then, you find the egg. Small, neglected, nudged out of the nest by a disapproving mother. But you can feel warmth growing inside.

Now your gryphon is in terrible danger, both from the other gryphon keepers and from a deadly plague that’s wiping out the Empire’s gryphons. Can you keep your gryphon safe? Where will you hide your new hatchling? Are you skilled enough to hunt its food or clever enough to steal it? Which of the gryphon keepers can you trust? How will you shape the young gryphon’s mind?

Wyrm riders invade from the north on their fire-breathing dragons, the natural enemy of the gryphons. Will you and your gryphon fight in the war, seizing your place among the elite? Or will you defy the empire and lead your fellow thralls to revolution?

Can you keep a runt gryphon safe with the whole world against you? The life of your gryphon, and the fate of an empire, is in your hands.

We hope you enjoy playing Runt of the Litter. We encourage you to tell your friends about it, and recommend the game on StumbleUpon, Facebook, Twitter, and other sites. Don’t forget: our initial download rate determines our ranking on the App Store. The more times you download in the first week, the better our games will rank.