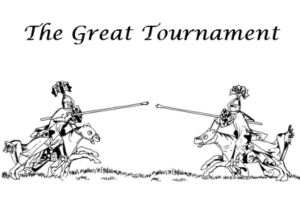 Play a young peasant boy who becomes squire to a legendary knight. Travel the realm competing in jousts, archery, and melee competitions. Train hard in order to become a powerful knight and eventually compete in The Great Tournament to decide the fate of the realm in this medieval story.

The Great Tournament is a 180,000 word interactive fantasy novel by Philip Kempton, where your choices control the story. It’s entirely text-based—without graphics or sound effects—and fueled by the vast, unstoppable power of your imagination.

Philip developed this game using ChoiceScript, a simple programming language for writing multiple-choice interactive novels like these. Writing games with ChoiceScript is easy and fun, even for authors with no programming experience. Write your own game and Hosted Games will publish it for you, giving you a share of the revenue your game produces.