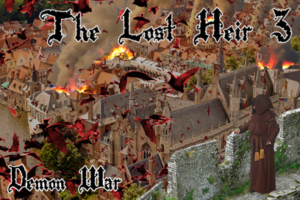 Defeat the rampaging demon horde, save the Kingdom of Daria, and avenge the death of your parents in the thrilling conclusion to this epic three part series! You’ll need all the power you can muster to finish building your legend, tapping into any of the dozen new prestige classes, including Druid of Decay, Dragon Knight, and even fighting the demons with their own fire by becoming a Demon Master!

The Lost Heir 3: Demon War is a 250,000-word interactive fantasy novel by Mike Walter—the conclusion to the trilogy—where your choices control the story. The game is entirely text-based—without graphics or sound effects—and fueled by the vast, unstoppable power of your imagination. It’s 20% off until March 24th!

Face betrayal, seek romance, battle enemies in war, and navigate the intrigues of court. The fate of the kingdom of Daria is in your hands.

Mike developed this game using ChoiceScript, a simple programming language for writing multiple-choice interactive novels like these. Writing games with ChoiceScript is easy and fun, even for authors with no programming experience. Write your own game and Hosted Games will publish it for you, giving you a share of the revenue your game produces.