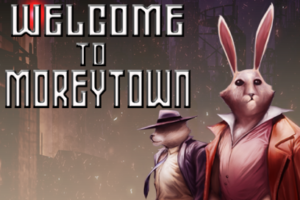 Choice of Games’ latest release will be Welcome to Moreytown by S. Andrew Swann. In Moreytown, You’re a moreau: a genetically engineered human-animal hybrid, a remnant of mankind’s last war. Surviving life in a Moreytown hasn’t been easy, but now, someone is out to kill you and your fellow “moreys”—unexplained fires, explosions, and the gangs swirling around the neighborhood add up to big trouble. It’s up to you to save your pelt, and maybe take over town. I sat down with the author to learn more about the game and their experiences writing interactive fiction. Look for Welcome to Moreytown later this week, releasing on Friday, May 5th.

Tell me about what influenced your world creation for Moreytown. What kind of a world is this set in?

Welcome to Moreytown is based on the universe I created with my first three novels back in the early 1990s. The world was built around the idea of the genetically engineered “moreaus;” soldiers engineered from various animals’ DNA. The novels, and the game, are set a generation or so after the wars the moreaus were created for, and after a mass wave of moreau immigration into the United States. Moreaus in the United States, in theory at least, have the same rights and equal protection under the law as any human– a substantial improvement compared to the countries where they were created, where they’re little better than chattel. The literary influences were Noir and Cyberpunk, so a dark and not-quite-dystopian setting. The world of the game, like the books, is gritty and urban. The characters experience street-level conflicts; dealing with cops, inter-gang rivalries, human-moreau relations and so on.

He’s a foundational author, right up there with Edgar Allan Poe. Someone I was reading back in junior high, before I knew I was a SF writer.

What kinds of social issues did you have in mind as you were writing it?

The moreaus, like any group, have their own unique perspective and problems. That said, they share common threads with many different marginalized groups. The original novels were written in the shadow of the Rodney King verdict and the L.A. Riots, so the analogs with racial tensions were inevitable. The prejudice many humans exhibit toward the moreau population can be easily seen as a metaphor for race relations in the US. But that’s not the only thing going on. The moreaus are also a multi-generational refugee population with some serious assimilation problems. In some sense, they can never assimilate into the surrounding society, because the barriers are physical as well as cultural. Markers of culture, such as dress and diet, are constrained by the moreaus’ biology. They don’t just look different, in a fundamental sense they are different.

Then there’s religion. Moreaus happen to know the details of their creation and why they were created. That has certain theological implications. Any moreau religion that defines the moreaus’ relation to God, by necessity has to do the same for humans. And given the historical treatment of moreaus by humans, it is easy for a new moreau religion to take a gnostic point-of-view, see creation as a perversion of the divine, and cast humankind as the villain. The political and social problems faced by moreaus mirror those suffered by any minority population embedded in a larger society; they live in a segregated community, they’re economically disadvantaged, individual bad actors are often seen as representative of the whole, and they have to bear with the prejudices and misconceptions of the surrounding society. It’s a story that’s as old as civilization, but the fact that moreaus aren’t a human population helps to emphasize exactly how universal these problems are.

What did you find challenging about the process of writing in ChoiceScript/our game design?

It was intuitively obvious that each scene could lead to multiple branching paths. What’s less obvious is that each scene might have multiple converging paths leading up to it. That means that the PC’s experience of a given scene is going to be influenced in large part by the path by which they got to it. The same line of dialog from the same NPC will read differently if the PC’s prior interactions with the character have been friendly, manipulative, or hostile. Also given that there’s no real way to write the narrative sequentially, it makes continuity problems easy to introduce and difficult to track down.

The other challenge is more in terms of design. In linear fiction you can build the plot around the measured release of information (Who is the villain? What are they planning? What secrets are the other characters hiding?) but, in a game where the player may go through multiple times, you can’t rely on these kind of revelations for drama’s sake. “Luke, I am your father,” is only going to have a big impact the first time around.

My introduction to the genre was back in the day on my old Commodore 64. I played a lot of Infocom’s library on that thing. I still have a soft spot in my heart for Zork and its sequels, which I’ve run on emulators on various pieces of hardware since. More recent vintage I’ve enjoyed CoG’s own Psy High.

What else are you working on now as a writer?

I have a few novels in various stages of development. I currently have two SF titles sitting with two different editors, one a time travel/alternate history story with zombies and zeppelins, the other an interplanetary thriller that’s sort of The Expanse meets The Bourne Identity.

What is your favorite word?

What profession other than your own would you like to attempt?

I’ve always had an interest in graphic design. I could easily see that my career could have headed in that direction if I’d done a few things differently out of high school.